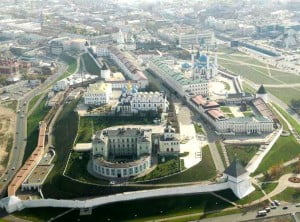 The uniqueness of the Kazan Kremlin is a number of features inherent only to him, because Kazan Kremlin – is, first, the world’s current center of Tatar culture and the state government, and secondly, it’s only surviving Tatar fortress of the Russian Federation, in which savings Based on the initial ideas of urban planning: basic planning, urban development and a functional organization of architectural complexes, and thirdly, here as elsewhere vividly expressed the historical interaction of various urban and architectural cultures: Volga Bulgar, Golden Horde, Medieval Kazan Tatar, Italian, Russian and modern. Kazan Kremlin – is one of a kind piece of conceptual synthesis of Tatar and Russian architectural styles. Being the most southern point of distribution sites Pskov-Novgorod building style in Russia, it is also the most northern point of the spread of Islamic culture in the world. 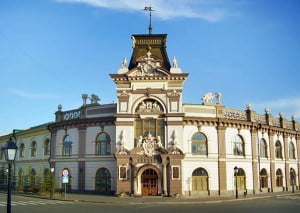 National Museum of the Republic of Tatarstan

National Museum of the Republic of Tatarstan (Tatarstan NM) – the largest in Tatarstan research and cultural institution of national importance. The basis of the museum put private 40000th collection Andrei Fedorovich Likhachev (1832-1890), known in the region archaeologist, historian, collector, and exhibits of scientific and industrial exhibition in 1895
have the origins of the museum’s collections were eminent scholars of Kazan University: A. A. Shtukenberg, NP Zagoskin, PIMoles, NF Vysotsky, NF Skating and other activities can be extended museum funds Kazan collectors and patrons: IFLikhachev, FA Likhachev, VI Zausaylov, DC Aleksandrov-Gaines, G. Galeev (Baroody), D. Samples, etc. 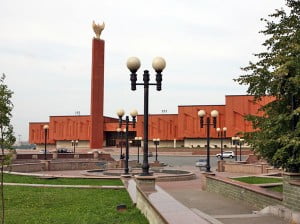 Museum of the 1000th anniversary of Kazan

Museum of the 1000th anniversary of Kazan opened on the eve of the 1000th anniversary of Kazan. museum is located in the National Cultural Center “Kazan” and was created as a division of the Museum of National Culture NCC Kazan. rich collection of material heritage gathered from Kazan and Russian expeditions represented the first room of the museum dedicated to the ancient Kazan. exhibition covers the period from the first millennium BC to the XV century. In addition to original exhibits in the exhibition includes recreations of lost monuments. Among them – the legendary Kazan gate. The city gates were a symbol of independence. reinstated as a key city. It is made by analogy Bulgar keys. A special place in the exhibition is the archival material, which tells about your stay in Kazan Peter I, Catherine II, Paul I, Nicholas I. The third room is dedicated to the history of the city in the Soviet period and modern Kazan. feature museum 1000th anniversary of Kazan – the presence of a large number of stage settings, which makes it more “alive.” 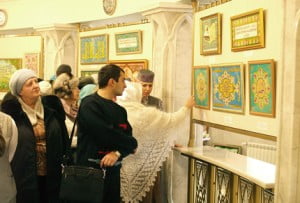 Museum of Islamic culture located in the basement of the mosque Kul Sharif. The exposition of the museum occupies two rooms with a total area of 566 m 2 . Museum was opened on 21 February 2006.

The main purpose of the museum is the realization of scientific, educational, research and educational activities, the identification and acquisition of museum objects and collections on the history and culture of Islam and Islamic civilization in the Middle Volga, their study and public presentation.

In the first room on the topics of the history of religions, the prophets, the original source and the basis of Islam, and the role of Islam in the regulation of various aspects of society, moral principles of Islam. The exhibition is interesting complex subjects for prayer-prayer – a prayer rug, a compass to find the direction to Mecca, prayer beads, mock Kaaba, multiple instances of handwriting and printing of the Quran, which was released at different times and in different places of the planet.

The second room is told in chronological order of the Islamic civilization of the Middle Volga region, the role of Islam in the history and culture of the Tatar people.

The combination of the classic principles of its exposure and advanced multimedia technology allows us to consider it as the only museum in the Volga region and the Research and Education Center, which focuses all the information about the geological history of Tatarstan, its fossils, flora and fauna, mineral resources.
To date, the 12 rooms features about 1600 exhibits, meteorites, minerals, rocks, oil samples, fossils of plants and animals. 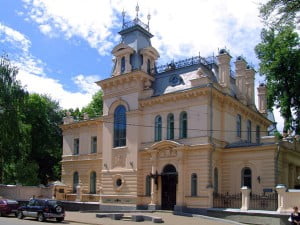 Museum of Fine Arts of the Republic of Tatarstan

Museum of Fine Arts of the Republic of Tatarstan – one of the largest and most famous art museums of the Russian Federation of the generic type. His collection includes paintings, drawings, sculpture, theater set design and decorative arts of the classical Western European schools of XVI-XIX centuries., Russian art XVI-XX centuries., Soviet and Tatar fine and decorative-applied art and a unique collection of icons cathedral of Sviyazhsk. The museum has the country’s largest collection of works by the artist N.I.Feshina. Part of the collection is represented in the permanent collections of the museum, familiarity with the source material provided by the device of temporary exhibitions. 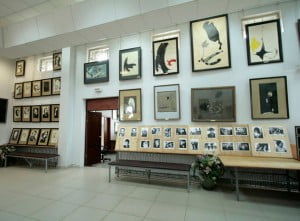 The Memorial Museum of Konstantin Vasilyev

Opened on January 10, 1996, since 1997 is a branch of the National Museum of Tatarstan.
museum occupies part of the building, in which the artist lived in the years 1949-1976. The basis of the exposure of memorial collection passed to his sister, by V. Vasilieva and his friends. The exposition is located in four rooms of the memorial halls of the following themes: family and home, the environment of life, artist’s studio, a room mother Claudia Parmenovny Vasilyeva. 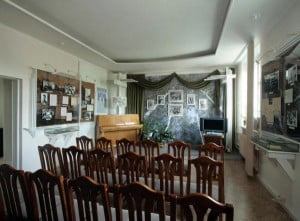 Museum office Musa Jalil is a branch of the National Museum of Tatarstan and is located in the house where the poet-hero and his family lived in 1940-1941, and from which he was drafted into the army.
Memorial Apartment restored to the wife of the poet and his contemporaries, who used to come here – the poet S. Hakim, composer N. Zhiganov, writer G. Kashshafa. In 1996, the 90th anniversary of the poet’s birth, the museum was incorporated adjacent apartment, which housed a literary salon (now an exhibition hall) and space for researchers. 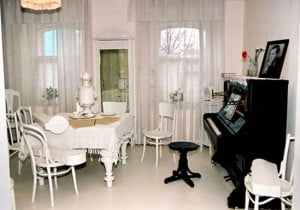 Opened on 25 June 1993. Salih Sajdasheva Museum is a branch of the National Museum of Tatarstan and occupies a two-story wing of the early twentieth century in the courtyard of the Tatar State Theatre of Drama and Comedy. K. Tinchurin. Here from 1928 to 1954, he lived and created his best works Saidashev Saleh, a prominent Tatar composer, founder of Tatar professional music, the creator of the new in the Tatar national art genre – the musical drama, first Tatar conductor, teacher, pianist, composer of 60 performances Tatar State Academic Theater. Mr. Kamal.

Literary Museum Evgeny Abramovich Boratynsky, a prominent Russian poet “of Pushkin’s time,” a friend of Pushkin, master elegies and philosophical lyrics, opened in Kazan in 1977 as a school museum. In 1881, the museum is included in the public network as an affiliate Literary Memorial Museum of Maxim Gorky.Since 1983 is a branch of the National Museum of the Republic of Tatarstan. Located in two areas: in the school № 34 and in the wing of an urban estate Boratynsky (1830, architect – Petondi FI), which the descendants of the poet lived until 1918.

Opened on 11 June 1986. The museum is located in the Old-Tatar village and occupies a two-storey mansion – the former home of Shamil landmark turn of the nineteenth and twentieth centuries. House built merchant first guild Apakov Ibrahim for his daughter, who married the middle son of Imam Shamil – Muhamet Shafi. Muhamet Shafi, a retired major general of the Russian army, he lived in this house until 1906.

Literary Memorial Museum of Maxim Gorky in Kazan opened March 12, 1940, since 1983 is a branch of the National Museum of Tatarstan. Housed in the former home of the second half Belyaeva XIX century., Where in 1886-1887. A. Peshkov (Gorky) worked apprentice baker.

House-Museum of Lenin in Kazan is a branch of the National Cultural Center “Kazan”, was opened November 7, 1937 for the 20th anniversary of the October Revolution in the wing of the house Orlov, built in the 1880s, which Ulyanov family rented from September 1888 to May 1989.

Museum of Kazan School of Chemistry

In the courtyard of the main building of the university attracts a small two-story building with a plaque in memory of the scientists working there, whose works are the golden fund of world chemical science: KK Klaus, NN Zinin, AM Butlerov, VV Markovnikov, A. M. Zaitseva, FM Flavitsky, Arbuzov, and BA Arbuzov.

Museum Zavoiskii laboratory was opened in September 1997 It was in room number 253 of the main building of the Kazan State University, in 1944, Eugene K. world first saw the magnetic spin resonance signals.

Ethnographic Museum of the University of Kazan

On the second floor of the west wing of the main building of the University of Kazan, with six white columns, is an ethnographic museum, which is one of the largest training and support institutions of this type in the country. There are thousands of exhibits describing the culture and life of the many peoples of the world, especially the people of our country and the multinational Volga.

Opening date – November 30, 1979. The idea of creating a museum of history of one of the oldest universities in Russia was born in the first year after the war, and was made in the University newspaper “Leninist” a student of History and Philology Yefim Bushkantsem. However, the work of organizing it began only after more than 30 years – in 1978, when the university was preparing for its 175th anniversary.

Zoological Museum of Kazan State University is one of the oldest Russian stores this profile, and the richness and historical value of the collections is one of the most significant zoological museums.

Geological Museum. AA Shtukenberg Kazan State University – one of the oldest and richest natural science museums in Russia, which were established at universities in the late XVIII century.

Few areas of research have appeared in Kazan University since it opened and successfully developed at present. These include botany, began teaching of which is associated with the name of CF Fuchs – the first professor of botany and natural history, which began its activities at the university in 1805.

Archaeological Museum of the University of Kazan

Archaeological Museum of Kazan University – one of the largest and oldest museums in the profile. The organization of the museum began in 1810 with the purchase of coins and ancient objects. In the first half of the nineteenth century at the heart of the museum lies the numismatic activity, so-called “myuntskabineta”, and the cabinet of antiquities.