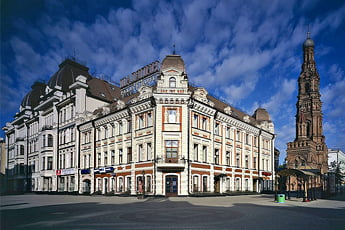 Bauman Street is the pedestrian street in the heart of Kazan; at different times it was named ‘Nogayskaya Road’, ‘Prolomnaya Street’, ‘Bolshaya Prolomnaya’. But Bauman Street was not always a pedestrian street, there were trams, trolleys and buses running along it. Nowadays both ends of the street are connected with the underground stations Ploschad Tukaya (‘Tukay Square’) and Kremlevskaya.

The historical silhouette of Bauman Street is accentuated with low houses that date back to the 19th-20th centuries. Walking along the street, visitors can take a look at Kazan’s places of interest, sample delicious local food in the House of Tatar Cuisine, find boutiques and souvenir shops to buy a wide range of exclusive mementos to take home as gifts.

Speaking about Bauman’s destinations and tourist attractions, we can’t but mention such places as the Bell Tower of the Epiphany Church, John the Precursor Monastery, Kachalov Kazan Academic Russian Bolshoi Drama Theatre, National Bank of the Republic of Tatarstan, Publishing House. At the very beginning of the street, there is an Arabian style clock, by which Kazan citizens like to arrange their dates. The pedestrian street is decorated with a fountain representing a nix (‘Su anasy’ in Tatar), fountains with doves and frogs. Visitors of Kazan enjoy taking pictures with the royal carriage of Catherine II, by which she travelled to Kazan in 1767, monument to Feodor Chaliapin, the Russian opera and chamber singer, and sculpture of the legendary Kazan Cat. The Monument to Prime Meridian installed in Bauman Street marks the reference point from which all road distances to Moscow, New York, Mexico City, North Pole and other destinations are measured.